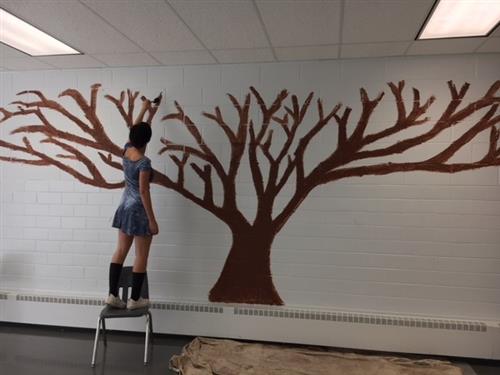 Have you noticed the big tree painted on the walls right outside the cafeteria? Have you ever wondered why it’s there? The tree was made by the We’re All Human Club and is meant to  “Bring kids together and have them recognize and use their Sources of Strength” according to WAH Vice President Junior Mackenzie Miller. “The overall goal of the tree is to share a piece of each student at Broad Run,” added WAH Secretary Senior Sydney Sokol. At the time of writing this article the tree is decorated with leaves full of things students are thankful for, however the them of the tree changes with each advisory lesson and season.

That has been helpful to some students like Senior Dylan Gonzales. “Seeing the leaves on the tree also has helped students, like me, realize that my feelings or my hobbies are shared and I’m not alone in the things I like or the struggles I go through…When we hang up the leaves the whole school can see that there are people out there like them, that share those same hobbies or feelings as them.” Gonzales also serves as a Vice President of WAH. “It’s helpful because everybody can like, show what their thankful for and other people who see the tree can notice, and, like, remember to be thankful for everything they have.” said Freshman Sydney Bunker.

The tree may help some but others think it’s ineffective.

“Nobody reads the tree. Nobody looks at the tree. The tree is just there.” said Junior Amara Poling. “Plus most of the handwriting is illegible,” Poling adds. “I feel like it’s performative,” said Freshman Veronica Aksenova. Freshman Sophie Pouliot adds “Well, the whole point is to say, things we are thankful for, right? If someone’s going through something very like let’s say they’re very depressed or very anxious. It’s not just saying, oh, I’m grateful for my family or like, I have my friend. That’s not really gonna give them less stress or less anxiety or allow them to then at all. So I don’t think it’s really, it feels very performative to me. It doesn’t feel like it’s actually gonna do much at all.”