The 2019 Broad Run Spartans competition cheer team entered the season with one goal, to winning a second consecutive state championship.  This goal was completed when they hit the mat at the Siegel Center in Richmond. After advancing through the preliminary round to the four team finals, Broad Run scored 264.5 points on its final routine. “ It was the happiest moment, pure bliss almost, all our hard work had paid off,” said senior Gianna Ditommaso.

Aside from the extraneous hours of practice these girls partake in, their bond is what sets them aside. “We’re all friends, and we trust each other, which makes everything a little easier,” said Carruthers. The girls are all extremely close, and their friendship makes all the long hours spent together way easier.

Many of the girls, including Besecker, all compete on an all star cheer team quite a ways away. These girls are truly dedicating so much to their passion. “I’ll do my homework in between drives from practice, and I’ll sometimes have to stay up all night just to makeup my school work” says Besecker. These girls truly dedicate themselves to the sport, and make sacrifices in their individual lives to immerse themselves in practice.  These girls really embody what being an athlete is, hardwork and determination.

Broad Run cheerleader and state champ Amelia Carruthers offers advice to any aspiring state champ; “Work hard before it counts, work hard during the off season, and don’t wait last minute to act like a champion”. These girls showcase the spirit and dedication that we at Broad Run try to emulate everyday. Congratulations to the Broad Run 2019 competitive cheer team, and may their hard work and dedication inspire us all to work a little harder. 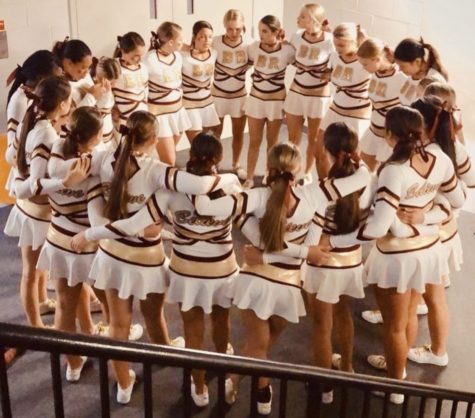