Battle of the Burn Burns the Dogs 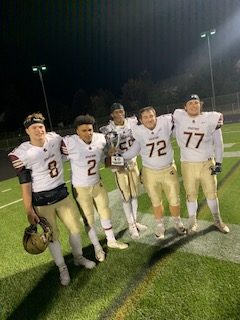 Spartans gather around Battle of the Burn trophy

Another season climax against Stonebridge was on hand this year. Both teams were an impressive (9-0) with yet another undefeated season on the line. Last year, in the regional championship, Broad Run was torched by Stonebridge in a heartbreaking 35-6 loss. While this was a DIFFERENT season for both teams, Battle of the Burn will always be one of the most anticipated games in this entire region.

Broad Run was ranked number four in the state compared to Stonebridge, who was in coming at number fifteen in the state. The Spartan  asked the players if there was anything different in preparation this year compared to past years; this was their last matchup with Stonebridge this season due to Broad Run’s conference change.

g the same thing; working hard, preparing, studying, and watching film.  It’s just the same game. Stonebridge has always been good,  but we’re gonna come out and smack them in the mouth.” said line backer and O-Lineman senior Mamadou Kante. “We have the best defense in the state of Virginia.”

O-Lineman and Defensive End, Peter Karagorgis agreed, adding,”We’re looking back at the previous play-off game and we saw what mistakes we made; so, we don’t have that bad of a score this week. We’re a lot better this year up front and in our receiver core.”

Broad Run and Stonebridge went back and forth in the first half with the score 13-14 Stonebridge at halftime. With the Spartans down a point at halftime and some fiery words exchanged, the Spartans emerged with a fire within them. After multiple penalties, the Spartans weathered the storm and prevailed. Senior wide receiver and defensive back Romy Miner took a pick deep into the Stonebridge redzone. The Spartans later capitalized, bringing the lead up to 21-14. Senior quarterback Mitch Griffis put on a clinic against Stonebridge, completing 32 passes on 47 attempts for 392 yards and three touchdowns.