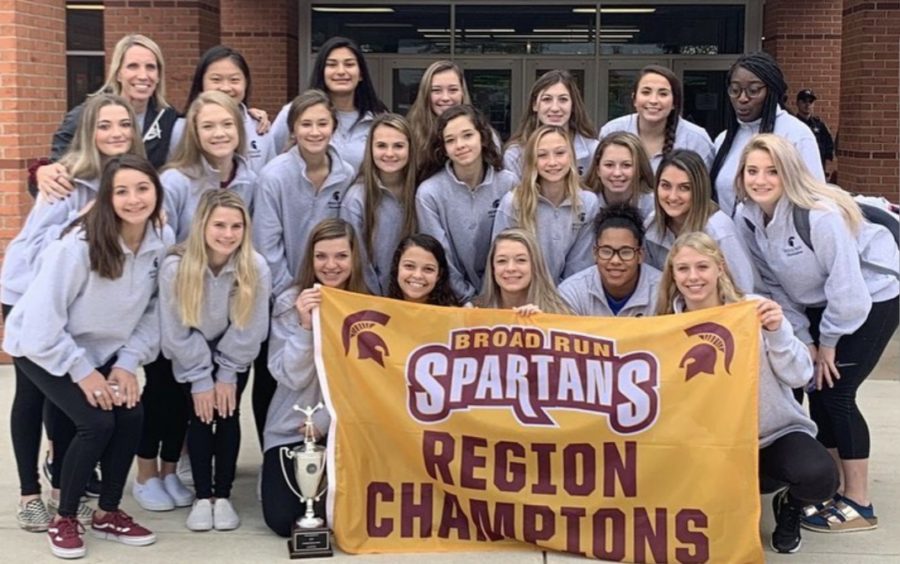 First off, the Spartans would like to congratulate all the senior cheerleaders!

It is an exciting moment at Broad Run, the cheer team is officially headed for states after winning districts and regionals next week. They are going to be competing as the reigning state champions of the Class 5 Division of the VHSL. However, all this does not happen on accident. Each one of the cheerleaders devotes a large amount of their time to become better with the aspiration of eventually earning a state title. They practice for two hours before school once a week and three hours everyday after school.  The key person who allows for all this to happen is the head coach.

Amy Sergi is the head coach of the Broad Run Cheer team. She has been doing it for eight years. Sergi herself has a lot of experience in coaching cheer and even being part of a cheer team.  She has cheered for Penn State and also for the Washington Redskins. Sergi also has previously  coached a program called Fitwize4Kids where she was the director of the team and also had her own gym called Cheer Madness where she had 150 athletes enrolled into her cheer program. According to Sergi, the best part of coaching cheer is watching the kids grow into better athletes and teaching them to understand what it means to be a true champion.

“I train my athletes to be champions on and off the mat and that requires them to Rise Up in all areas of their life and strive to be the best versions of themselves. I challenge them to be “leaders” in their school and good role models so others will follow,” says Sergi of her athletes.

One of the cheerleaders on the team is Payton Besecker. She has been part of the school cheer team since freshman year  and is also on one of the most competitive cheer teams in the country which is Maryland Twisters F5. She drives about two hours to competitive cheer practice everyday.

“It is extremely hard to maintain such a packed schedule. I usually get back from my competitive cheer practice around 10:45 pm so having to still find time to do homework around that is very hard, but it’s always worth it in the end,” said Besecker.

“Winning states last year was such an amazing experience. I can’t even describe how grateful I was to have been on such a talented team with such a hardworking group of people. I remember when they called our name for first just feeling so extremely blessed because I knew that there were so many people that would’ve done anything to be in my shoes.”

The cheer team would not be complete without the senior captains. The captains of the cheer team are Victoria Rebholz and Gianna DiTommaso. It is their last year on their team, and they have been part of the team since freshman year. We asked them a couple questions regarding their experiences on high school cheer.

What is the best part of being on the cheer team?

Gianna: “The best part about being on the cheer team is the bond we form and how we become a family throughout the season.”

Victoria: “The best part is having people around you that share the same goal as you and work just as hard as you go get to that end result. Also being around those 22 other girls almost daily helps to make a bond to want success for them just as much as you want it for yourself.”

Gianna: “Winning states is so surreal. knowing that all our hard work payed off and being announced champions with a group of people that have become you’re family is the one of the best feelings in the world.”

Victoria : “The feeling was amazing because we had put so much work into that whole season and having the final outcome of winning by so many points made it all feel worth it in the end.”

How do you feel that it is your last year cheering for Broad Run as the captain of the team?

Gianna: “I am happy and sad, being a captain is so amazing because leading the team through the ups and downs as we get closer and closer gives me a sense of pride I haven’t had my other three years on the team but I am sad because it is my last year on a team that has made such a big impact on my life.”

Victoria: “I feel honored to be leading the team alongside Gianna DiTommaso who has been on the team with me since freshman year. Being captains together for our last year and being able to share all of our failures and successes to our teammates now helps us to teach them what we need to do to be the best team we can be.”