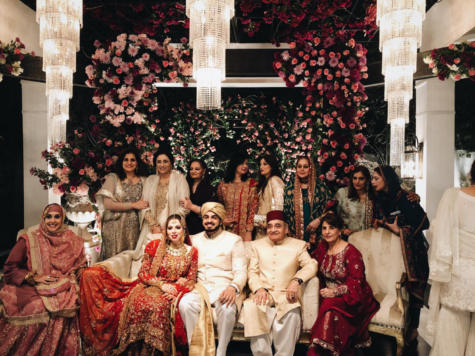 Family Photo With the Bride and Groom, My Mother, and Her Cousins.

One week ago my first cousin got married. It was such an amazing experience being there. I also got to skip one week of school to travel to Pakistan, and spend that time with my family. It was also such a monumental moment, because it was the first wedding in my family, and it was the first time that all the first cousins were gathered together. When we arrived to the Jinnah International airport at 3 a.m, my sisters and I were greeted by my mother and her cousins.

When we all went home, I got great news that school was cancelled, because of snow. I was also in such great relief, because the weather in Karachi was amazing. It felt like I was vacationing on a tropical beach, because I have never experienced such great weather in Pakistan before, because the summers there are always so brutally hot. On the first day, we were all awake by noon, because my sisters and I were all tired from the 16 hour travel. 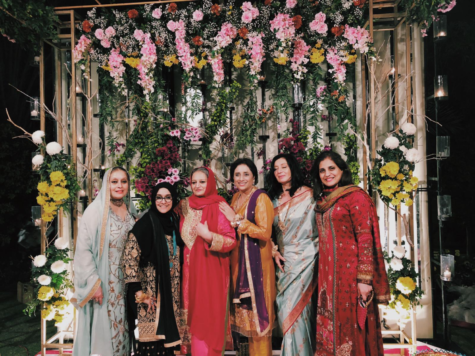 Then, at around 2 p.m. we went to my aunt’s brother-in-law’s house to put on mehndi. We also met so many of our close family at his house like our cousins, aunts, and my mother’s school friends. Then, later in the evening, the groom’s side got invited to my aunt’s house for a dinner and get-a-long. There, we socialized there with more of my mother’s cousins who came earlier that day. All the cousins were wearing coordinated, bright, colorful clothes.

Her front yard was decorated with lights hanging from the trees, and flowers drooping down from above. There was also a sitting area on the floor where we played music from the dholak (traditional drums),  and sang old songs. Then, on the second day my older sister and I went went with my cousins, got some smoothies from a place called Evergreen Cafe, and went to my aunt’s brother-in-law’s house to watch dance practices. 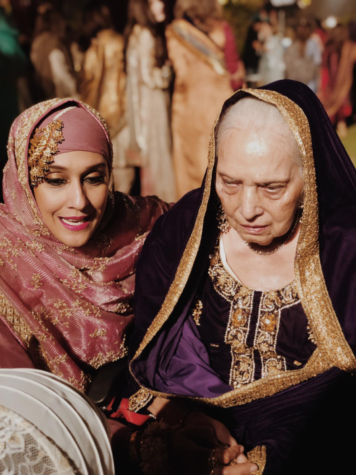 My Grandmother and Mother Talking to an Old Friend

Later that night, the bride and the groom side were invited to a mehndi, an event traditionally held by the bride’s side where they dance. The look on everyone’s faces was irreplaceable as they came in, to their surprise they were astonished with how the placed looked, all considering it was done in a backyard. As guests started to trickle in, the immediate family from the groom’s side lined up, and starting throwing flowers at the bride’s immediate family as they entered on stage. As everyone got seated, it was finally time for the dances. Everyone was excited yet nervous to see how everything was going to turn out.

On the wedding day we were all so excited because we didn’t know what to expect. The decorations were looking grand, everyone was dressed in beautiful clothes, and the best thing of all is that we got to spend time with each other, because it is the people who make the experience great.