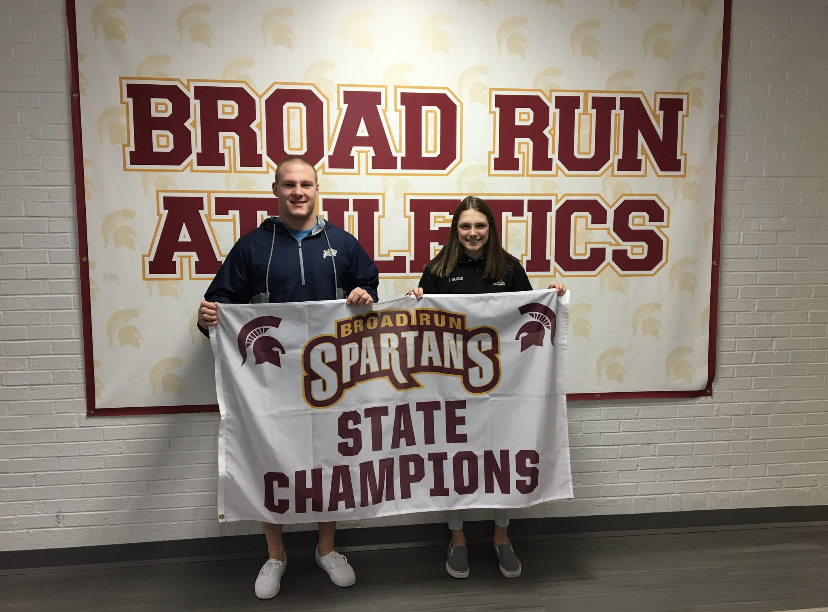 John Birchmeier is a 5x state champ. He has won four state titles for wrestling and one state title for cheer. He wrestled at Robinson High School on Saturday, February 17 to win his fourth and last state title as a wrestler for Broad Run. Birchmeier has worked very hard his whole life to get to where he is now. Even as a kid, he worked for this dream of his. A normal day for John in elementary school consisted of one hundred pushups, one hundred sit ups, and a mile and a half run every morning before school with his dad. He started lifting in middle school, and has lifted pretty much every day since then.

“I have always believed in getting better each day, and every day I try to find a way to improve.” Birchmeier stated.

Birchmeier had to sacrifice a lot to be where he is now. He never got to go out with his friends as much as the other kids did because he was always training. Birchmeier always kept a positive attitude about it though. He would just say that he was just having a different kind of fun then his friends were. Meeting and training with some of the best athletes in the country is his version of fun. There are many experiences that he had that many people don’t get to experience, so he always says how grateful he is for those opportunities.

“I have been very fortunate with the coaches and mentors I have had in my life because without them I would not be where I am today. My family inspires me because every day they fully support me in anything I do. My family has done everything for me and I am beyond grateful for that.”  Birchmeier said.

Birchmeier said that winning each state title has been a different experience for him. Winning his freshman year might of been the most exciting for him because it really opened his eyes on all of the potential that he had, and how hard work really can accomplish anything you want.

While being a 4x wrestling state champ that wasn’t the only thing Birchmeier had a talent for. His senior year he decided to try something completely new and that was cheerleading. He said that winning states for the BR cheer team was a very special moment to him because of the relationships that he had formed on the team. It was more than just some guys and girls on a team, he said they were like his family. That is what made them so successful this past year.

“I love each one of my teammates more than anything. They are my brothers and sisters. I would do absolutely anything for them. Winning states in cheerleading was very satisfying because I had finally achieved my childhood goal of being a 4x state champ. Every ring is so exciting and I am so fortunate to be who I am.” Birchmeier said.

“The worst thing I can be is the same as everybody else.” -Arnold Schwarzenegger.

Birchmeier went by this quote in his everyday life. In fact he did succeeded at not being just like everyone else. His attitude and work ethic got him 5 state rings in his 4 years here at Broad Run. There are not many people who could have done that besides John Birchmeier.

Birchmeier has a full ride to the Navy for wrestling. After accomplishing his goals here at Broad Run High School he still has a long and competitive journey ahead of him, and many more goals to set. He hopes to be a starter as a freshman, and he hopes to win a National Championship in college. After his time wrestling at the Navy he wants to serve in the Navy and see where life takes him from there.

Kayla Graham won the state championship for swim this season. She finished in 1st place in the 200 IM with an incredible 5A state and team record!

¨I have been swimming for a really long time and I never really thought of winning state champs as a goal of mine. It seemed too unrealistic. Now realizing that I was able to actually do it is just an amazing feeling,”  Graham said.

Kayla Graham worked extremely hard for where she is right now. She continues to be motivated and work harder and harder each day.

¨In the end, being able to see my hard work pay off at meets helps me stay motivated to keep swimming because it is truly such a gratifying feeling.  Also, swimming helps me maintain my schedule which is very important,” Graham says.

Kayla truly puts her heart and soul into her swimming. She is dedicated to go to early practices and train daily to improve her skills.

¨I think my dedication really benefits and helps me in sports because it always makes me want to do better and strive for the best. This makes me work harder and push myself to be the best athlete I can be,¨ Graham said.

¨I of course would not be here with my supportive family, coaches, and teammates. They all have helped me so much along the way and they have all been there for me when I need them.  My coaches and teammates are a huge part of my accomplishments because they are always pushing me to do better and to train harder. I also love the school spirit. I love the energy of high school swim meets with everyone cheering. It is a very fun atmosphere to be a part of and it really motivates me!¨ Graham said.

However, Kayla is far from done. She plans to continue working hard and meeting the many goals she has for the future involving swim.

¨I’ve had such a successful season so far and I have achieved so many goals this year regarding best times in my events. I want to continue to thrive and qualify for nationals and in college, it would be amazing to qualify for NCAA championships!¨ Graham said.

Kayla feels so overwhelmed and grateful for her victorious season so far. She has many big goals she has still yet to accomplish and is trying is very best to make them happen.