Families and students gather on the court for Senior NIght.

The Broad Run Spartans went head to head up against the John Champe Knights on Thursday, January 31 at 7:15 pm.

It was Senior Night for the BR girls, Micaela Elhafdi, Karleigh Pollok, and Hodan Mohamed. They walked the court with their families and got a standing ovation for all of their hard work and dedication for the last four years.

Managers Alana Wilcox and Shaila Wood also walked the court for their senior night.  The game was held in Spartan territory. The fans filled up each side with maroon and gold, as well as blue and silver.

The Spartans came in with a record of 3-15, and the Knights with a record of 6-12–a close matchup between the two teams. To start the game off for BR was Micaela Elhafdi, Hodan Mohamed, Karleigh Pollok, Abigail Neff, and Freshman Yvonne Lee.

These two teams don’t back down; they play to win. From previous matches, students knew this was a game they wouldn’t want to miss, it was a competitive matchup for both teams.

The first quarter consisted of lots of back-and-forth leads between the two teams. Pollok came out strong and made most of her shots making it a close score in the first quarter. The quarter ended with a score of 8-7 with the Knights on top.

During the second quarter, the BR girls decided to step up their game. They got the rebounds, made their shots with very few turnovers, and stayed out of foul trouble. Half time approached with the Spartans leading 18-16 over the Knights.

The third quarter was very intense. Girls were shooting left and right, as well as fouling. Things started to heat up for a little bit. However, the intensity of this quarter came to an end when freshman Yvonne Lee had a clumsy incident. While the Knights were on the free throw line shooting, Lee was anxious to get that rebound. She started to move her feet too early, and slowly she ended up on one foot trying to balance herself with her arms up in the air, and she came to a fall at the end.

“All I was thinking in that moment was can this girl hurry up and shoot the ball before I make a fool out of myself,” Lee said.

There was a video taken of Lee falling to the ground that went viral on instagram with over one-million views. The quarter finally came to a close.

The quarter ended with a Knights lead of 38-24 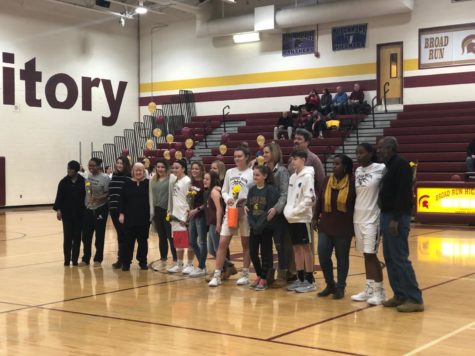 Lyndsay Goodwin Families and students gather on the court for Senior Night.

The BR girls started to get tired in the last quarter of the game. Many mistakes began to widen the John Champe lead. Baskets were missed, and fouls were called. In the end, the John Champe Knights defeated the BR Spartans 50-32.

The last home game for these seniors came to an end, leaving them disappointed, but grateful for all of the games they had won in that very gym, and all of the memories that they had together.

“Success is not an accident, success is actually a choice,” said Elhafdi. Her inspiration comes from Steph Curry who is currently a Golden State Warrior. She looks up to him not just in basketball, but in life. She hopes to play basketball in college and continue her journey as an athlete.

“Broad Run basketball made me want to play forever. The players and coaches were everything I could of asked for. I hope this is not where my basketball journey ends, but is just the beginning for me, ” said senior Elhafdi.